Where now for the grassroots housing movement? Come and join grass roots campaigns and housing activists to discuss where we are now, where we want to go and how to get there.

Some commented numbers were slightly down on the year previous when the RMT threw their weight behind the Mayday march after Bob Crows death. On the way to the rallying point people would have come across an SWP banner emblazoned with “Hands off Tower Hamlets”. They’re consistent, if nothing else, we should give them that.

Starting off at Clerkenwell Green, you were overwhelmed by the 57 varieties of Stalinism both overseas and domestic. When one looks overseas, you have serious militancy being shown on Mayday; there is a worry that the British equivalent is being turned into a historical re-enactment society being led by the bureaucratic trade union wing of the labour movement.

There were smatterings of union banners and housing campaigns, but alongside that you had ample banners with Stalin and even on one occasion Soviet-era style military formation marching with flags. Agh, working class regimentation, just what we need! But anarchists weren’t about to be undone with the pointless A to B marches and a half empty Trafalgar Square. 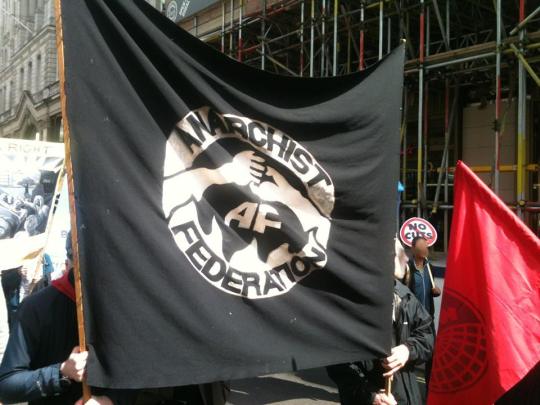 At 4pm there was an initiation to briefly occupy Tower Bridge to highlight the lack of social housing and the continuing gentrification/social cleansing of London. Recent reports suggest fifty thousand have been pushed out of London because of the increased cost of living. 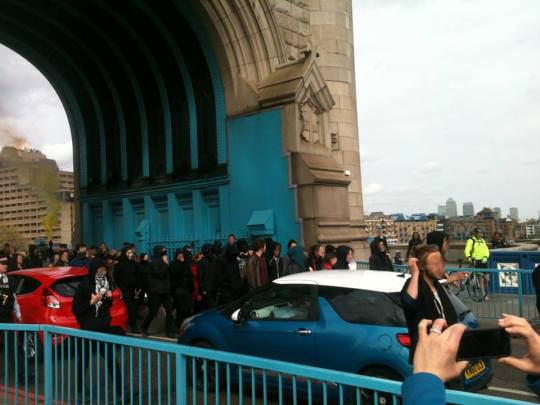 A large contingent of activists were able to take the bridge stopping peak-time traffic accompanied by flares and then impromptu like snake around to London Bridge with a large police escort before scattering to the four winds at the other end of London Bridge.

After a brief restbite from the occupation of the bridge, the Mayday evenings, happenings, were put together by Class War under the auspices of their widely touted ‘Fuck Parade’. In Germany, apparently ‘Fuck Parade’ is a counter-cultural festival with anti-gentrification flushes to allow city dwellers to express a sense of community in places where they’re being squeezed out. Starting off near Aldgate East a large crowd of several hundred revellers started off with a make-shift sound system before spilling out into the road. There was concern that the police would confiscate the sound-system, but they must have thought better than taking on the crowd. 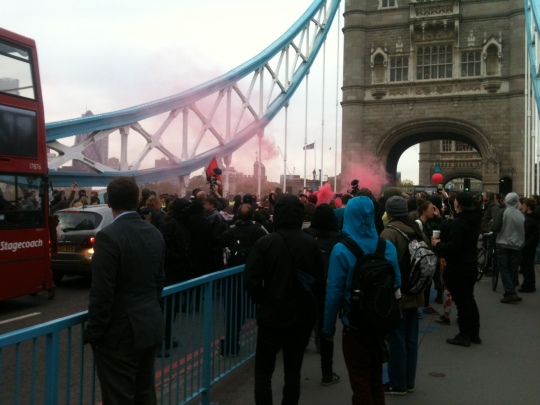 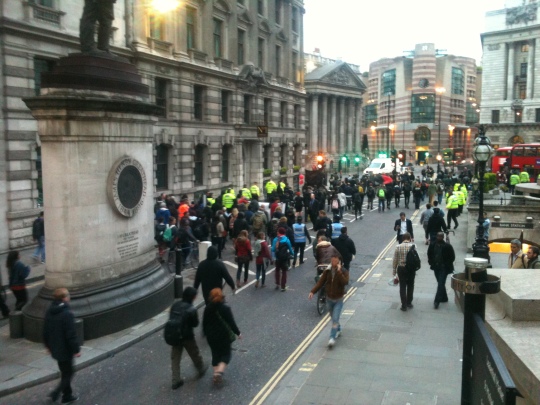 From Aldgate East the crowd took the long almost sporadic journey to Soho Square, avoiding the various ambushes of the entourage of police who followed them, taking in the capitals sights while avoiding mass arrests. The police were of course on hand to protect various assets from protests along the way including Southwark Council offices and oddly a pub full of what, I assume, were bankers. 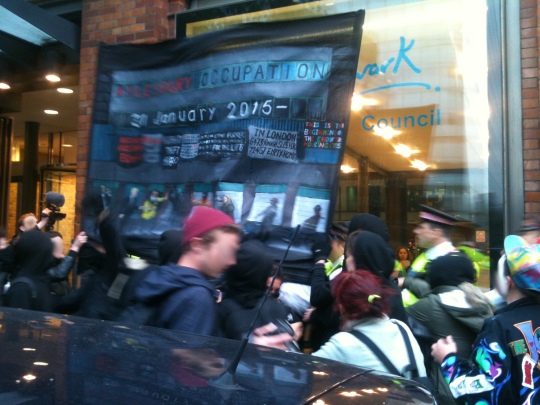 Protecting who against what?

The entourage encountered a lot of questions on its way around. A major criticism is that more could have been done to explain to all and sundry with either literature or banners what the full purpose of the march was, but sufficient people showed an interest and conversations were had. And some people did join us on route.
After a trek and half the make shift sound system and followers ended up a convergence hub just off Soho Square, put together by the Squatters Homeless Autonomous (SHA) crew to highlight the 74,000 empty properties in London. No doubt the powers that be will prioritise their removal, above any of the progressive demands being put forward on social housing.

All in all the day was a militant display for Mayday. With a bit of forward thinking we can rescue the whole sordid affair from the dustbin of history where some would happy it was confined.

Remember the dead, fight for the living!
Happy Mayday 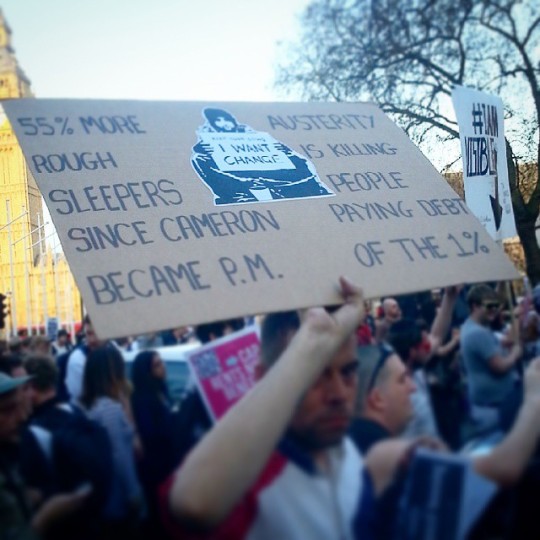 “The housing crisis is a lie, there is no housing crisis, there are 74,000 empty homes.” Never had a truer word been said than this loud-hailed to the assembled crowd at Whitehall for the ‘March for the Homeless’. The internationally co-ordinated march on Wednesday (15 April 2015) was to highlight the increasing number of homeless deaths and the growing trend of homelessness in the last few years since austerity measures had been put in place.

About 300 to 400 people amassed outside Whitehall, but the numbers don’t do the crowd the full justice they deserve. It managed to draw in people from a number of backgrounds and campaigns; a lot rough sleepers, as well as people from the squatters and the various housing campaigns. TUSC were also on hand, in true opportunistic mode, to soak up publicity and photo-ops (is it election season?) which makes them almost indistinguishable from any other political party.

The police struggled to keep up as the march militantly held up traffic as well as moved on from place to place with the various sound systems in tour. Something of a carnival atmosphere was broken out at various times. At a later point of the day the march ended up outside the gates of Buckingham Palace, with all the accompanying chants and banter you can imagine before people started to peel-off. Maybe next time we’ll have bigger numbers…

How to get involved:

* most of these campaign groups hold public meetings where anyone can come along and help plan actions, make group decisions, and show solidarity

* look out for upcoming events such as marches, protests and open days at occupations

See also the umbrella group Radical Housing Network which helps to coordinate many of the groups seen here. (Twitter page)

To suggest additions to this map please tweet at @actioneastend

Focus E15 invite you to the Brewery (52 Chiswell Street, EC1Y 4SD) for 6pm sharp on Weds. Feb. 11, to welcome those arriving at the 2015 British Credit Awards’ £4,000-per-table black-tie affair, in which bailiffs and debt collectors will be receiving awards for making families homeless.

Since companies like ‘The Sherriff’s Office’ receive nominations by throwing people and their belongings out onto the cold streets of London, we intend to turn the front entrance of the Brewery into a mock eviction site for attendees to experience before an evening of champagne, three-course dinners, and the kudos of their peers.

We encourage anyone concerned with social cleansing and the criminalisation of poverty to bring rubbish bags, boxes, and broken pieces of furniture to scatter across the front entrance of the Brewery as guests arrive to receive awards like ‘Enforcement Team of the Year,’ ‘Third Party Debt Collection Team of the Year’ and ‘Consumer Collections Team of the Year.’

We encourage a peaceful but outraged action, and particularly hope those with first-hand experience of bailiff evictions will come out and share their stories with attendees as they enter the venue.

London AF members were on both the South London and East London feeder marches last Saturday 31st January. Despite the foul weather at least 4,000 turned out. This time, whilst the usual Trot suspects turned out in force, they didn’t manage to swamp and trotify the march. Nevertheless it was excruciating to hear them wetting their pants over Syriza in Greece (ahem! they’ve gone into coalition with an anti-semitic and racist Greek equivalent of UKIP!)

Nevertheless there were many groups and individuals of a libertarian/independent outlook and this stopped Trot overload. Now we must do our utmost to link up all the genuine groups in London fighting all aspects of the housing crisis, be it evictions, property developments and social cleansing. problems facing private renters, struggles in social and council housing. 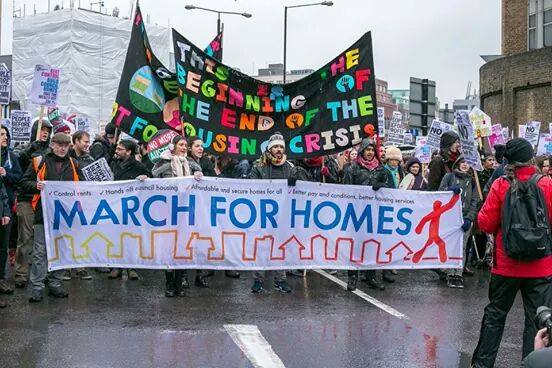 AF members supported a lively and determined demonstration against the cuts of notorious ‘easycouncil’. Hundreds turned out, despite the winter conditions. They marched from Finchley Central, with widespread support from local businesses and residents, to finish at the library that campaigners had successfully managed to save.

The text of the leaflet handed out is available under ‘Leaflets’.

A team of Community Housing Inspectors took a tour of local letting agents along Green Lanes to investigate their practices. About twenty people took part in the inspection, asking letting agency staff about their company policies, including: whether they accept tenants claiming housing benefit; how many months deposit they require; what charges they make to tenants; and what is the longest tenancy period they offer. Of the agencies visited, four agreed to take part, while Winkworths, Kings Group, Bairstow Eves, Brian Thomas and Anthony Pepe all denied access or refused to speak to the self styled inspectors.

The inspection-cum-protest took place against a backdrop of housing benefit cuts, a lack of Haringey letting agents willing to accept tenants on housing benefit, rent inflation outstripping wage inflation, and a concern that landlord and letting agent practices are leading to a significant change in the local demographic.

Rent increases in the private rented sector are not driven by increased costs. In a recent survey by Shelter, only four per cent of landlords said they had increased rents because increased mortgage costs. By contrast, one in five had put up rents because their letting agent had encouraged them to.

Renting out property is not a business like selling luxury cars: housing is a basic necessity. When letting agents put up fees and rents, this pushes tenants further into poverty. Haringey Housing Action Group will support any tenants facing eviction because they cannot pay their rent.

The protest felt like a huge success. We managed to gather information that will be of help to prospective tenants in the borough (the results will be publicly available), and we put across our demands to the letting agent staff, as well as to hundreds of passersby, many of whom told us of their own bad experiences of local letting agents. We also shut down a handful of letting agents, possibly the ones who felt they had more to hide. And we turned the tables on the letting agents who carry out checks on our homes without permission.

Haringey Housing Action Group organised this action alongside Haringey Solidarity Group and Haringey Private Tenants Action Group. We are part of a growing network of groups in London who are beginning to take action around the increasing housing crisis, groups such as Hackney Housing Group, Housing for the 99%, Hackney Digs and Camden Federation of Private Tenants.