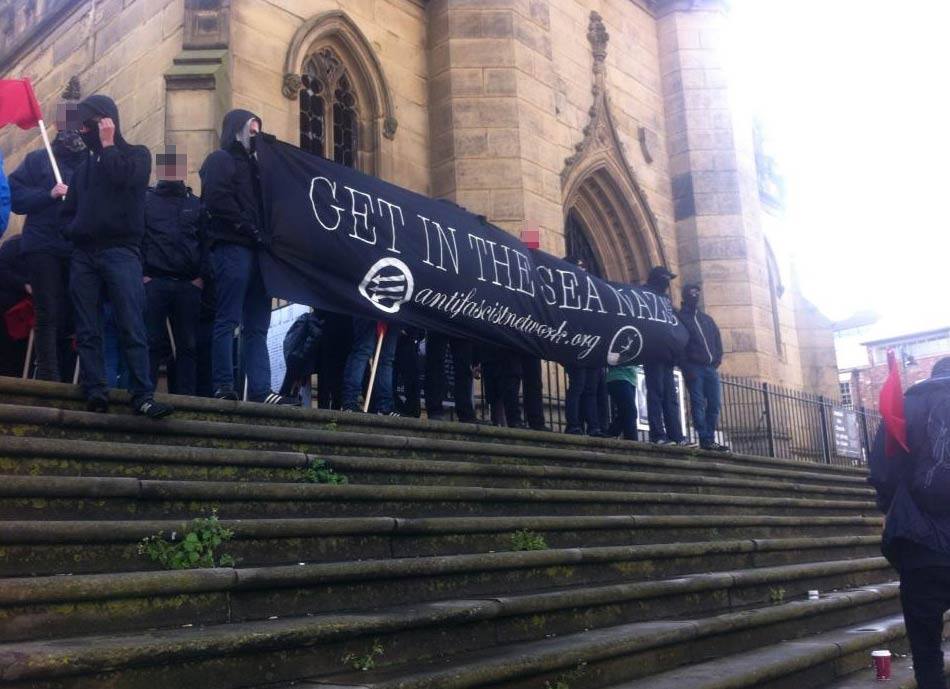 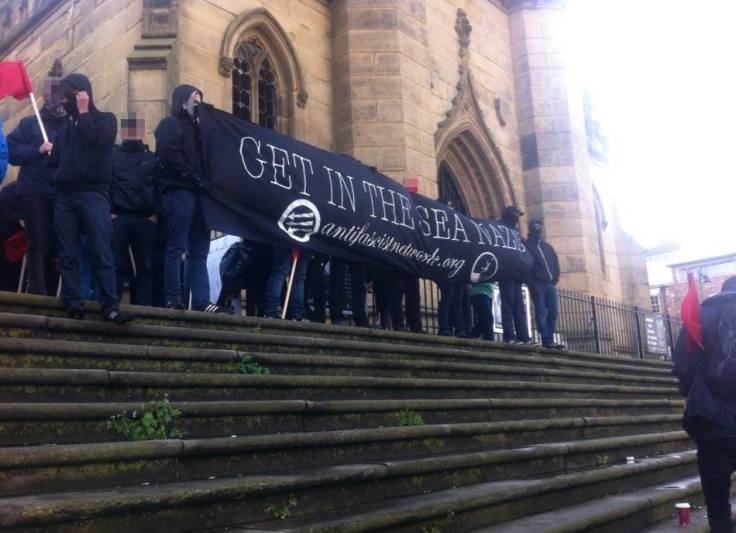 The day started off brightly, in both terms of the weather and of moral. Various anti-fascist groups from around the country began the day by meeting up at St Luke’s church in Liverpool. They were also joined by members and supporters of the UAF, Trade Unions, Love Activists and other groups.

The meeting point was an old church that had been bombed out during the war by the Nazis, a rather apt meeting point then considering the history of the church. The irony should not be lost when hundreds of people meet up at a church, a church previously bombed by pilots of the Luftwaffe, subscribers of hate and of Hitler’s ideology, to set off on a march opposing some of the same ideas that people had then, as unfortunately, a very small group of people do now – support.

By the time the march set off, it is fair to say there were at least 300 to 400 in attendance.

The aim of the day was to stop the march at any cost, the White Man March, a march which had been organised by a group called National Action (NA). It was rumoured that up to 150 nasty, small minded and openly racist members of NA would turn up in Liverpool and would march through the streets waving their fascist flags and shouting racial slurs.

Now 150 may not sound a lot in comparison to the 460,000 residents of Liverpool, but would you want 150 openly racist, fascist and Hitler adoring moronic members of a far right group traipsing unchallenged through your town?

Amidst a sea of banners and red flags, chants were shouted a plenty. It was great to see so many locals of Liverpool either clapping in support and or joining the march itself as we walked from St Luke’s through the town and up to Liverpool Lime Street station. Intelligence received was that some of the fascists were in the Wetherspoons pub, The North Western by the station. Soon a sea of anti-fascists were lined up outside, although they were unable to gain access due to the Police blocking all entrances and ‘protecting’ the fascists whilst they were in the pub.

More intelligence came through that a group of fascists were in the station itself. This indeed was true; a group of fascists were surrounded for their own protection by the police were outside the stations left luggage shop (now the subject of much derision). They were soon surrounded by a very large crowd of anti-fascists trying to push their way through to get at the fascists. Various objects such as water bottles, eggs and bananas were hurled in their direction, many of these objects hitting their desired targets! 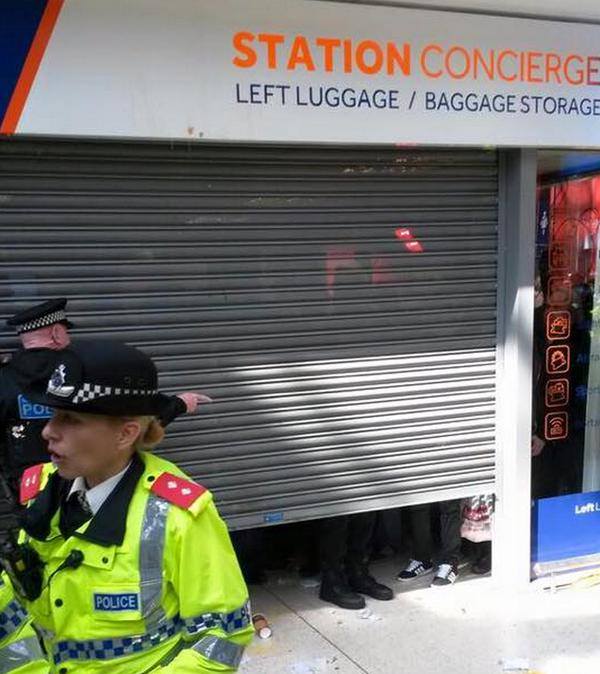 The fascists proceeded to retreat inside the shop; it was at this point that the shutters came down on the left luggage shop, thereby trapping/protecting the fascists inside. After a period of time, the fascists were then bundled out of a side entrance of the station while under heavy police protection in to police vans and taken away from the scene for their own safety. Also in the station was one of the leaders/speakers of the NA, who not only got his notebook taken from him, but also was confronted by various anti-fascists until the police intervened.

Outside of all of this, another leader of the NA was also being confronted; he had milk thrown all over him for his troubles. He was then bundled into the back of a police van and driven away for his own protection. While all this was going on, a group of 5/6 fascists, one who believed to be activists involved in National Front (NF) were crossing the road near the train station, seemingly trying to get to the safety of the Wetherspoons pub, The North Western.

They were confronted by a group of ant-fascists who soon surrounded the group, this essentially stopping them from going anywhere. The police seeing this quickly intervened, not before an exchange of pleasantries took place. The police then proceeded to walk the group up the street and to the police vans parked at the back of the station. The swell of anti-fascists soon got quite big and had surrounded both the police and the fascists as they walked up the street. There was lots of pushing and shoving and insults aimed at the fascists, with this culminating in lots of exchanges. These measures only stopped once more when police arrived on foot and on horseback. The police then proceeded to bundle the fascists in to a police wagon and then drive off. This then left only a handful of fascists in The North Western, who again were also surrounded and protected by the police as they were escorted out of the pub, again in to police wagons and driven off for their own safety.

There was easily a 1000 or so on the march as once again the anti-fascists took to the streets of Liverpool and marched their way through the city. During the march whilst taking the time to talk to some Liverpudlians, there was talk of how quite a few had never been to anything like this before i.e. an anti-fascist march. They spoke of how proud they felt that Liverpool had shown the door to the fascists and had made it clear that any form of fascism and or racism definitely had no place whatsoever in their great city. 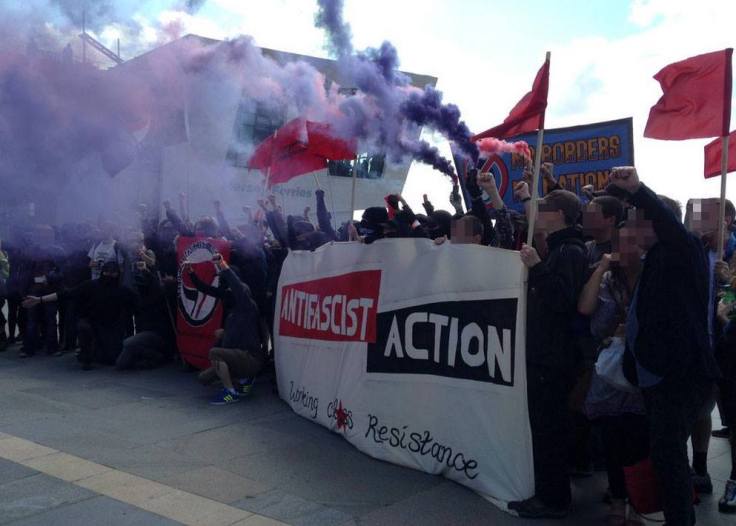 Once the march had reached Pier Head, a great cheer went up. The fascists were nowhere to be seen, instead all that stood was a huge mass of people cheering and waving flags and congratulating each other on the success of how the fascists were well and truly smashed and booted out of Liverpool as fast as they came. The march culminated with flags being flown, smoke bombs being let off and a rousing rendition of “we are the reds” with hundreds of anti-fascists joining in and jumping up and down.