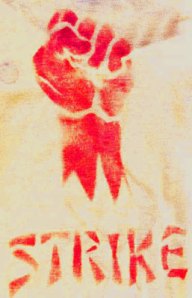 N30 must just be the beginning.

Perhaps as many as 3 million workers will be striking on November 30th in the biggest round of industrial action since 1926, with members of 24 unions represented. Alongside this will be various actions including occupations and demonstrations.

We think it is vital that the pickets be reinforced in the morning as soon as they start. This means not just those striking going down to the pickets but also pensioners, the unemployed and unwaged workers, students from schools, further education and universities. If you are a private sector worker then why not take the day off by phoning in sick and joining the actions? It is vital that the strike action is generalised, that is that as many people as possible are involved and support it. In addition unity has to be created with the electricians taking action on the same day and with the Occupy movement.

The TUC and the union leaderships are using N30 as a safety valve to head off the growing anger of workers. As such, N30 should be seen as merely a start with the need for further united and determined action. This means workplace assemblies and meetings uniting workers from different unions and from none to consider joint action. It means increasing coordination between workers in both the public and private sectors. It means wildcat strikes outside the control of the union leaderships. It means increasing coordination between those in work, the unemployed, pensioners and unwaged workers and school students, FE and sixth form students and university students. It means the setting up of coordinations of all these groups, linking action in the workplace with action in the neighbourhood and on the estates and at the job centres.

The government and its friends in the media will intensify their campaign to destroy this struggle through mockery, disinformation and downright lies, the threat of violence and finally the use of violence through the police. The student mobilisation on November 9th was an example of this. First of all threatening letters issued by the police to participants in previous actions and for which they had not even been prosecuted let alone sentenced, the threat by the police to use rubber bullets, the plainclothes snatch squads operating within the demonstration, the police kittling of the electrician, stopping them uniting their march with that of the students, and finally the demonstration as one huge moving kettle with a massive show of police force.

Increasing mass actions on a decentralised basis and increasing unity can thwart these threats. Remember, on N9 taxi drivers were able to blockade central London causing a traffic grid-lock. We must remember our own power. As workers we can stop the trains, the buses, the tube, the workplaces. We can block the streets and squares. We can halt their shows of police force, we can halt their plans to cut services, wages and pensions. We have the power to finish with this corrupt society and create another based on equality, solidarity and human dignity. Let’s step lively in that direction!